One of my favorite places to be on the weekends is the Flea Market at P.S. 121 in Park Slope (7th Ave between 1st & 2nd Streets). Over the years, I have not only found everything from rare books and discs to furniture, clothing, and gifts, but also numerous friends and neighbors. For shows I've done, I've often found the most obscure (and most needed) props and costume pieces. Mostly, I've found fun--and a sense of community. (See the short film clip below.)


COMING SOON TO A THEATER NEAR YOU

Two of my own one acts, ALL THE COMFORTS OF HOME and CONQUERING THE FEAR, will be presented in a one-act festival by the Queens Players beginning July 16th. It should be a fun bill (or rather, two fun bills), playing at the highly pleasant Secret Theatre, easily accessible from Manhattan (first stop on the F in Queens, diagonally across from Silvercup Studios). They did a terrific job with A REASON FOR ALL THINGS in January, and these comedic one acts (which also include one by the estimable Edward Musto!) should be great fun.

with Adia Tucker and Ben Dziuba

ALL THE COMFORTS OF HOME

with Brian Rush and Madeline Reed
as part of

The Comedic One Act Festival

ALMOST AMY is the group releasing (or pre-releasing) their new, self-titled album at www.learning2dance.com. The two lead singers/guitarists are better known as dancers, though--Mark Ballas and Derek Hough, who appear on DANCING WITH THE STARS. (Ballas is this year's professional champion with Kristi Yamaguchi, while Hough danced with Shannon Elizabeth. Ballas, still rumored to be dating Sabrina Bryan, used to be professional partners with Hough's sister, Julianne--also a DANCING star, two-time winner and now a country singer with her own album!) The two are young boyhood friends who are still friends and roommates, and happen to make good music together. The sampler of their songs shows promise--not quite rock, not quite pop, not quite folk, they are refreshingly melodic and wistful without ever getting sticky or sappy. The vocals are terrific, as is the rapid guitar work. These are two, hard-working young guys who know how to entertain. The album is only available online at present, but it's well worth checking out.
Posted by Judd Lear Silverman at 2:01 PM 1 comment: Links to this post

IF I COULD TALK TO THE ANIMALS
If you stop and think about it, our pets are the most selfless creatures: willing to give us comfort, friendship and affection, listening to our whining, forgiving us when we forget their needs, etc. (How often do WE do that for others?) It only seems right, then, that every so often we do something selfless for them. 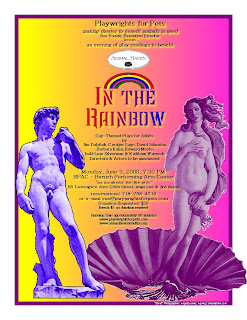 This coming Monday, June 9th, Playwrights for Pets will present another fun evening, raising money to benefit Animal Haven, that sterling no-kill animal shelter that serves and protects animals throughout the five boroughs. For those who've not been with us before, it is an evening of staged readings, performed by gifted artists donating their time and talent. For those who are "regulars," this evening promises to be particularly enjoyable. (Plays for the evening include work by Jim Dalglish, Carolyn Gage, David Johnston, Barbara Kahn, Edward Musto, and Kathleen Warnock, as well as yours truly. A talented ensemble of actors & directors has been assembled to perform the new works.)

Past "themes" for PFP evenings have included "Mischief Night," "The Marrying Kind," "In Transit," and "Fables & Fairy Tales (Shaken, Stirred and with a Twist)," as well as special family matinee programs (at Animal Haven SoHo). On June 9th, we will present "In the Rainbow," an evening of plays from the gay and lesbian community, which run a gamut of topics and promise to be both wildly funny and deeply touching. The performance will begin at 7:30 in the beautiful basement recital hall of the Baruch Performing Arts Center, 55 Lexington Avenue (at 25th Street). The requested donation is $10, and every dollar goes directly to benefit Animal Haven. For reservations, please call 718-768-4213 or e-mail sue@playwrightsforpets.com.
Posted by Judd Lear Silverman at 2:49 PM No comments: Links to this post