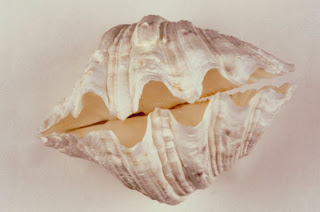 HAPPY AS A CLAM

This morning, eating my breakfast at Two Boots (my favorite haunt in Park Slope), I thought that at least for the moment I was "happy as a clam."

As I should be. Things could be better (on the employment front) but things could also be much, MUCH worse . . . !

And then, of course, it started . . . the brain, which hadn't dared to start prior to the first sip of iced coffee, lest it strain itself unnecessarily . . .

Just how happy is a clam?

Why are clams purported to be so damned gleeful?

Is it "low expectations"? Does a clam not expect that much--and therefore it doesn't take much to make one of them happy?

Do they keep life simple? Free from too much stress? Even before they end up on ice, are they staying cool?

And if they are successful at doing this--as most of us homo sapiens are NOT . . . are we then not even as smart as clams? Let alone, infrequently as happy . . . ?

Perhaps we should take a lesson from our mollusk friends and just keep our big fat bivalves shut . . .

MANY FACES OF MERYL

I admittedly have not been dwelling in the camp who feel Meryl Streep can do no wrong. (I've frequently felt that she can . . . and does!)

Having followed her career studiously for many years (she is only a few years older than myself), I have fully understood her allure--after all, she is tall, attractive, smart as a whip, has a good ear, a great voice and, let's face it, quite a presence. She is understandably a major talent and it is not surprising that she is one of our most honored actresses. But there are times that I have found her self-conscious, mannered and, at times, overly self-congratulatory. There were certain films that I could feel her patting her own back, saying "good job, Meryl." Her prodigious technique may have been on display, but I also felt that her technique was showing. I won't bore you all with the roles I disliked--well, okay, I personally found her stilted, wilted and "in quotes" in SOPHIE'S CHOICE and SILKWOOD, among many others. (I can feel the angry hate mail being composed already, so hang in there a few more moments, if you will . . . )

Then there was a period where I felt she stopped taking everything (and herself) too seriously and just left herself alone, so to speak--instead of "working" it, she became the character just by trusting her own, perfectly wonderful instrument. She was remarkable as Karen Blixen (aka Isak Dinesen) in 1985's OUT OF AFRICA--although I think it's hard to be less than terrific in any film by Sydney Pollak. (And it was obviously a good year for her, as she gave an appropriately brittle and believable performance in the film version of David Hare's PLENTY. ) Somewhere around that time, a dingo ate her baby--but we'll just leave that be. In 1990, she was wonderfully real in the screen adaptation of POSTCARDS FROM THE EDGE, playing a roman a clef version of Carrie Fisher. She was actually enchanting as Albert Brooks' inamorata in DEFENDING YOUR LIFE, a shamefully neglected and highly enjoyable film that ranks as one of her best (and his, too--he wrote and directed it, after all). And while others may debate its merits, the triumvirate of Meryl, Goldie Hawn and Bruce Willis made DEATH BECOMES HER a black comedy I can still watch again and again. This was a looser, freer, more fluid actress, skilled in comedy and still truthful.

Then she started taking herself too seriously again, beginning to assume the role of "elder stateswoman." Lots of clunkers--and lots of adaptations of famous books and plays that preyed on her vaulted, vaunted status to guarantee some box office gravitas. Many of them sank like a stone. (I remain particularly grumpy about the film version of the wonderful play, MARVIN'S ROOM.) She was serviceable as an action hero in THE RIVER WILD, but a bit overwrought in BRIDGES OF MADISON COUNTY and fun but slightly self-conscious in ADAPTATION. She was so-so in THE HOURS, giving the least luminous among some wonderful performances, and I would have been perfectly happy if she had retired after trying to outdo Angela Lansbury as the Mother from Hell in the remake of THE MANCHURIAN CANDIDATE. (Then again, only Liev Schreiber survived that film unscathed--ONLY ONLY ONLY WATCH THE ORIGINAL OF THAT ONE!!!)

As for THE DEVIL WEARS PRADA--okay, but she could have phoned it in (and maybe did). Mannered, perhaps, but at least she was using the mannerisms to her advantage. She was skillful but not especially interesting.

I am charitably skipping MAMMA MIA--it would just be too easy . . . !

Haven't seen DOUBT yet. Have it ready to watch, but I'm scared--scenes I've seen look overwrought (and I absolutely loved it onstage with Eileen Atkins and Ron Eldard).

now THIS is the role she should be winning Oscars for, a whole passel of 'em! She is amazingly believable, funny, touching and full of life as the beloved Julia Child, catching the mannerisms, voice and SOUL we all feel we know so well. You cannot take your eyes off her, she is such a treat and a pleasure to watch. It is my hope that THIS ends up being one of the roles she is most remembered for--she is as magnificent here as Julia Child was herself in life.

I must hasten to add that JULIE & JULIA is a sheer delight, even BETTER than most of the reviews might lead you to believe--and they were mostly positive. I was thoroughly entertained from start to finish, even moved to tears a couple of times! The estimable Stanley Tucci makes a terrific partner as Paul Child, and the scenes between Streep and Tucci are sexy, funny, romantic, and irresistible. I found myself wanting to stay at the movie theater all day. (Of course, it also was air-conditioned there on the hottest day of the summer!) But I also think the "Julie" section of the movie has been unfairly under-rated, especially given the splendid performances of the always delightful Amy Adams as blogger Julie Powell and the sexy support of Chris Messina as her husband, Eric Powell. (Julie's decision to cook every single recipe of Julia's MASTERING THE ART OF FRENCH COOKING and blogging about it is the impetus for the whole film--which is told in juxtaposition with how Julia Child became, well, Julia Child, and how her famous career and book were born.) Nora Ephron's direction and screenplay are self-assured and great fun, making this her best film to date (and certainly her best looking film to date as well). There are many, many terrific cameos by some of the best actors on both coasts, with special mention going to Frances Sternhagen and particularly Jane Lynch. (Lynch, playing Julia's sister Dorothy, temporarily hijacks the film in a terrific performance that makes you think Dorothy's life should be another film onto itself! The scenes with the two sisters are hysterical, priceless!) This film is one of the truly adult treats of the summer of 2009.

But yes, ultimately, the film belongs to Julia--and Meryl's wondrous portrayal. If I was ever going to fall in love with her, well . . . okay, to misquote a Tom Cruise film (don't get me started!!!) . . . Meryl, you had me at bon appetit!
Posted by Judd Lear Silverman at 7:54 PM No comments: Links to this post 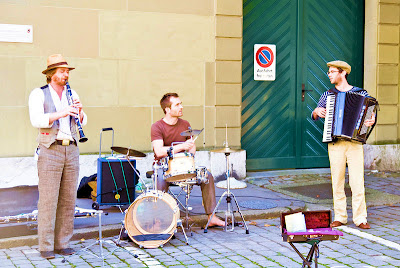 As an admitted addict, I am well familiar with the professed desire--to quit or curtail one's Facebook habit, presence, etc. Feeling somewhat whorish, smirk-y, embarrassed, like I've imbibed entirely too much, said a bit more than I meant to, eaves-dropped on one-too-many conversations, I swear to go cold turkey, to clean up my act, to at least set a limit, a curfew . . .

Of course, I am a man of few traditional bad habits--I don't smoke, drink (one glass, cheap date) or gamble.

In these tough economic times, being on Facebook is like being a street busker--performing your act to the crowd that passes by, sometimes attracting attention, maybe even winning a crown or two from a generous onlooker, entertaining the masses . . .

And sometimes, with too much time on my hands, I will I.M., add the witty quip, upload my latest twisted animation or my newest antique photos, lovingly hand-tinted, all with the assumption that my "friends" on Facebook can't wait for another of my bon mots, my special treats . . . and sometimes, I get so disgusted with myself, the sheer unmitigated ego of it all! I suddenly want to hide in shame, thinking what a needy cuss I've become!

But then, if I'm truly honest with myself . . . I am born to entertain, it's what I do, or rather, what I love to do. I live for wit and words and visual arts--and sharing those experiences with an audience. Whether this is a good thing or not, for me or for the assumed audience, is irrelevant. It is what I do, as medicine is what a doctor does, rocket science is what a rocket scientist does, etc.

And in an age where it is tough to get produced, tough to get presented, tough to even make a living no matter what the field, Facebook is providing a soap box, a street corner for FREE (at least for now, thank God!), and the passersby can either watch or not, throw a coin in your cup . . . or not . . . and you can put your wares out there: your wit, your opinions, your visuals, your projects, your connections, your dreams . . . it may not shake up the world but at least you are putting it out there INTO the world, and who knows . . .

The street performer is slightly sad. We'd always wish him/her a better venue to make performance dreams come true. And like Bert in MARY POPPINS, we know that those chalk drawings, no matter how beautiful and inviting, will disappear with this afternoon's sudden rain burst . . . but for the moment, it is lovely and the fact that it is there for us, however fleetingly, makes life a bit more lovely for the moment . . .
Posted by Judd Lear Silverman at 1:45 PM 1 comment: Links to this post